While Peeling Away Layers of Tension: Recommend a Few Books for Equine Practitioners

First, I would like to invite you to go on a little “trail ride” with me where I will highlight some of the mentors who have helped me to put the “why” behind the effectiveness of our work as Masterson Method followers and Practitioners.

After becoming a certified Masterson Method Certified Practitioner (MMCP) in the fall of 2014, I felt an incredibly strong desire to know more about the horse. I wanted to see the horse from the inside out to better understand what might be going on in the horse’s body in regard to performance issues and patterns that I have come across as a practitioner. Keep in mind that I was never questioning the reality of the effectiveness of the Masterson Method as that had been proven to me time and time again from watching Jim’s demos and from the experiences that I received throughout the fieldwork program. 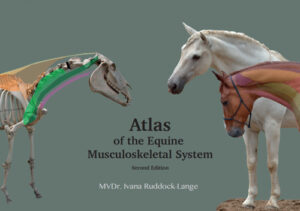 n my “trail ride” was taking a 3-day Whole Horse Dissection Course with Dr. Ivana Ruddock-Lange in October of 2014 (I have since taken 2 additional courses with her as the learning never stops and one with silver colored hair can only retain so much). Ivana may well know every muscle, its function, attachment and insertion, but her heartfelt emphasis of that course is to stress the importance of the fascia as well as the horse maintaining mobility and slide within this incredibly important connective tissue that surrounds every muscle, fills every cavity, and protects the organs.

She was my first teacher who brought to my attention the revelations that horses are in fact attached tongue to tail, that they were not put on earth for us to ride (“ouch!”), and additionally stressed the importance of the soft touch of a skilled bodyworker. I now had a much better answer to why our educated touch while doing the Masterson Method techniques was so effective on an anatomical level. (I do want to add that I see many horses that feel and look good in their body, appreciate their work, and have an excellent relationship with their owner. I included the info above not to add pressure or guilt, per se, but to add mindfulness in this regard).

Second stop…now I wanted to know more about the horse’s biomechanics. How is he meant to move naturally, and while being ridden, especially as he moves up the potential training pyramid within a myriad of disciplines? Enter my mentors, Jillian Kreinbring and Dr. Gerd Heuschmann. I pursued an Applied Anatomy Course with Jillian and two Biomechanics courses and riding clinics with Dr. Heuschmann along with reading Gerd’s books titled “Tug of War, Balancing Act, and Collection or Contortion.” 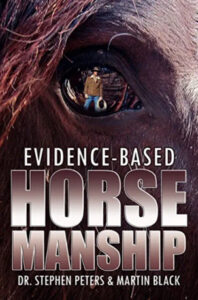 e horse’s brain. Just how do they process information, and what are the similarities and differences in how the horse processes versus the human? Enter Dr. Steven Peters along with his book titled “Evidence Based Horsemanship” and his videos of the brain dissection (while working with Jim and Mark Rashid).

The book is seemingly simplistic, but I picked up so many captivating pieces of information that were either new to me or helped confirm the “why” I was piecing together through observing certain patterns while working with young horses. I have watched Dr. Peters’ brain dissection video at least 4 times as I pick up more with each viewing. Dr. Peters, along with Maddy Butcher’s “Horse Head” helped to answer the “why” on how the horse processes information and additionally taught me more about the nervous systems where the horse can resid 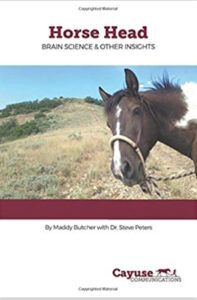 e and how our work as Masterson Method practitioners can facilitate the horse’s access to the oh so important Parasympathetic Nervous System.

Fourth stop…by now I had been practicing the Masterson Method for over 5 years and had seen some great (and also some potentially dangerous) responses from horses during bodywork sessions. I had developed a reputation for being able to work with some very “difficult” rescue horses and/or OTTB’s. A few of the horses went from lowering their head, eyes closed and breathing deeply to standing up on their hind legs. In other words, after receiving only a few minutes of the Bladder Meridian, they had gone into a deep, serene state of the “rest and digest” Parasympathetic Nervous System and then snapped right out of that into the “fight or flight” Sympathetic Nervous System. I needed to know more.

It is clearly true that “adding movement to the soft tissue or junction of the horse releases tension and increases range of motion in the key areas that can affect performance,” as taught by our leader Jim Masterson. The work of Dr. Peter Levine and his books “Walking the Tiger and In an Unspoken Voice” build upon this and add a great deal of “why” I saw the actions described above and “why” I was often told that clients’ horses spooked less after a bodywork session. While Dr. Levine’s work centers around humans, his work further contributed a great deal to my understanding of Dr. Steven Peters’ work. Additionally, from him I learned the importance and very real fact that emotion resides in the body, and that releasing tension in an area while adding movement (somatics) can and will facilitate the release of emotional trauma. “Ohhhh boy!” 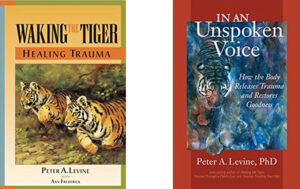 Fifth stop (and the impetus for sharing this list)…last Christmas, Jane Brown, a very close friend, former student and now MMCP colleague gave me the book titled “Sacred Spaces, Communion With the Horse Through Science and Spirit”, by Susan Fay, PhD. Jane clearly knows me very well. Upon finishing the book, I ran downstairs and immediately emailed Dr. Fay. I asked if she was aware of the Masterson Method and expressed how much her book resonated with me as an MMCP and felt that it would absolutely enhance the work of all Masterson “students” (be it fans, readers, viewers, enrolled students in the MMES program, fieldwork program and beyond!). I also asked if she would be open to doing a recorded interview with me that we could share in Jim’s newsletter. 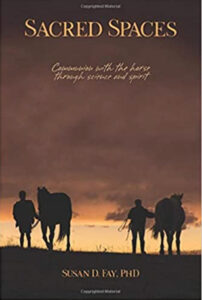 Dr. Fay readily agreed, and we set a date. Now, I needed to read the book again and highlight my questions and observations so that I could get the most out of the interview for all of us. Well, after 32 Post It’s, multiple paper-clipped pages, and 2 ½ legal pages of notes in numerical order, I was set for the call. However, the Colorado “snow Gods” did not oblige, and Susan was once again snowed in and without internet. We agreed to chat unrecorded on the phone, which ended up lasting over 2 hours! Susan is delightful, insightful, passionate and generous with her work.

My notes started literally in the preface of the book where she highlights the idea that many people do not think that they are capable to reach the inner sanctum with the horse; they think that it takes superpowers and so forth. Dr. Fay expands on why Jim’s words are correct in regard to “anyone CAN learn this work if they WANT to,” “watch the horse…the horse will tell you,” along with “you have to be out of your mind to do this work”.

She puts the science behind energy fields, animal magnetism, the heart brain, the gut brain, and the proven value of mental imagery. Dr. Fay discusses “Attribution Bias” (we do this with horses and humans alike), “Fundamental Attribution Error,” and entraining to positive heart waves expanding on why horses are such good healers. She also brings renewed importance to correct breathing, both for us when around horses and for the horses themselves in regard to health and performance. Susan put the “why” horses can trust us and feel safe with us when we are congruent with our emotions and “why” we are drawn to be around them as well as being well received by these magnificent beings.

The learning never stops. How true are the words of Jim M…“watch the horse and the 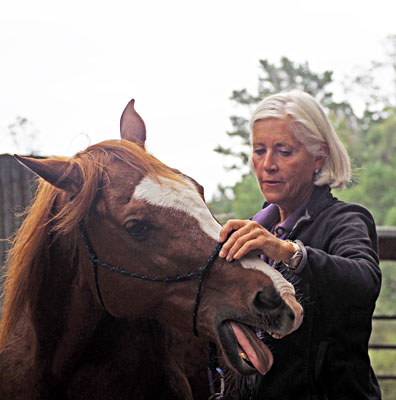 horse will tell you,” “soften,” and “allow the horse to move through the fidget, stay in the neighborhood, yet soften”. “Yes!” I’ll say that we are working with the horse’s nervous system when practicing the Masterson Method and it has been proven repeatedly that releasing tension in an area improves the range of motion and thereby the performance of the horse (one of the parameters of a clinical study according to Dr. Fay is that the results can be shown repeatedly).

Now, just how many pictures of horses yawning does one need to see? And the real “money” in this for me is that this work develops trust in an incredibly forgiving being that is designed to flee when fearful, cares very much about how he fits into his herd , and was not put on this earth to ride.

How thankful I am for all of those who are passionate about making this world a safer, healthier and happier place for horses and for humans alike. Cheers to these incredible mentors (as well as the many unmentioned) for having the courage to put the “why” behind the sometimes “unprovable” or “woo woo” energy aspect of working with horses.

And cheers to you, Jim Masterson, for creating a method that is very teachable, incredibly effective, and makes all of us better humans for our horses.